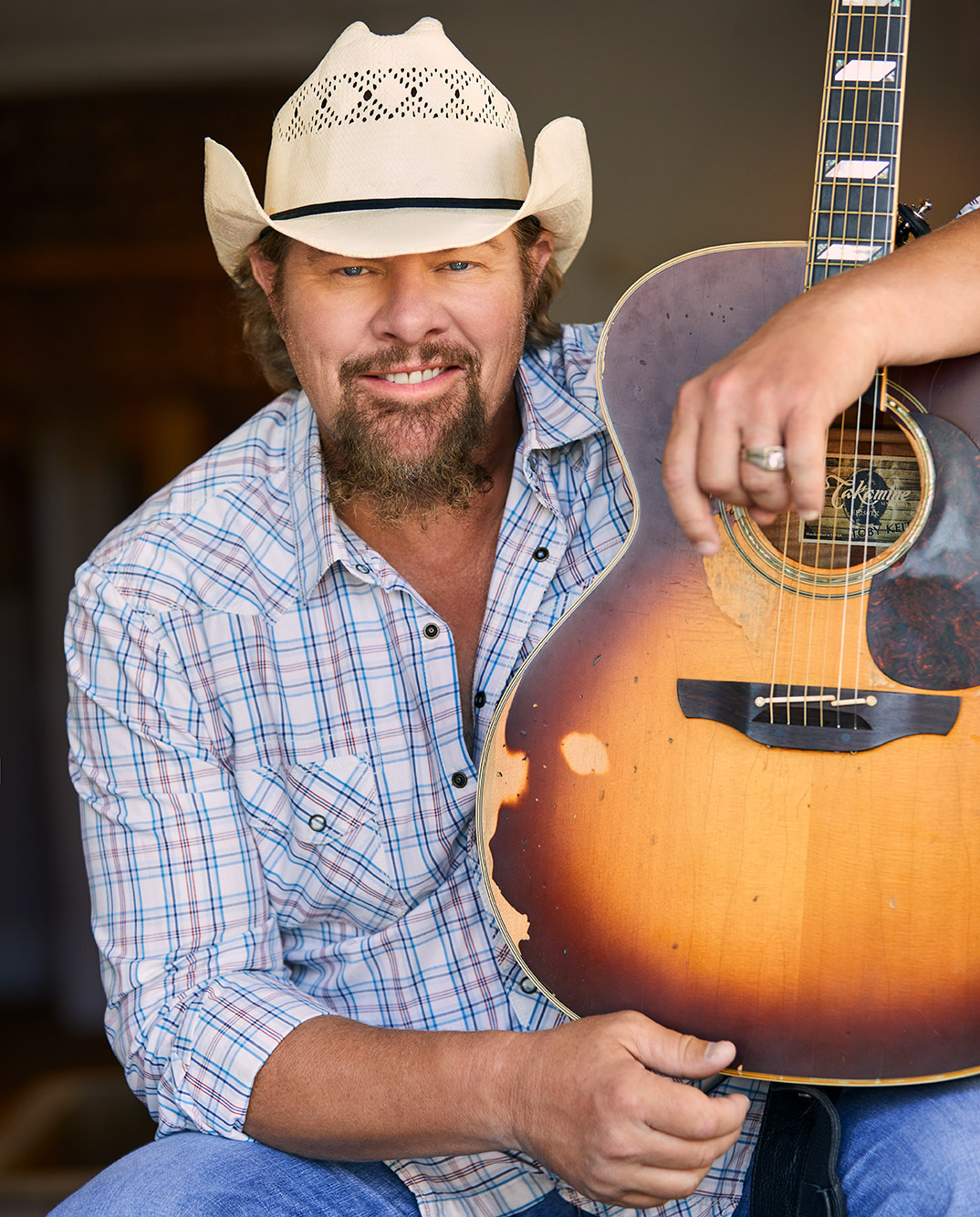 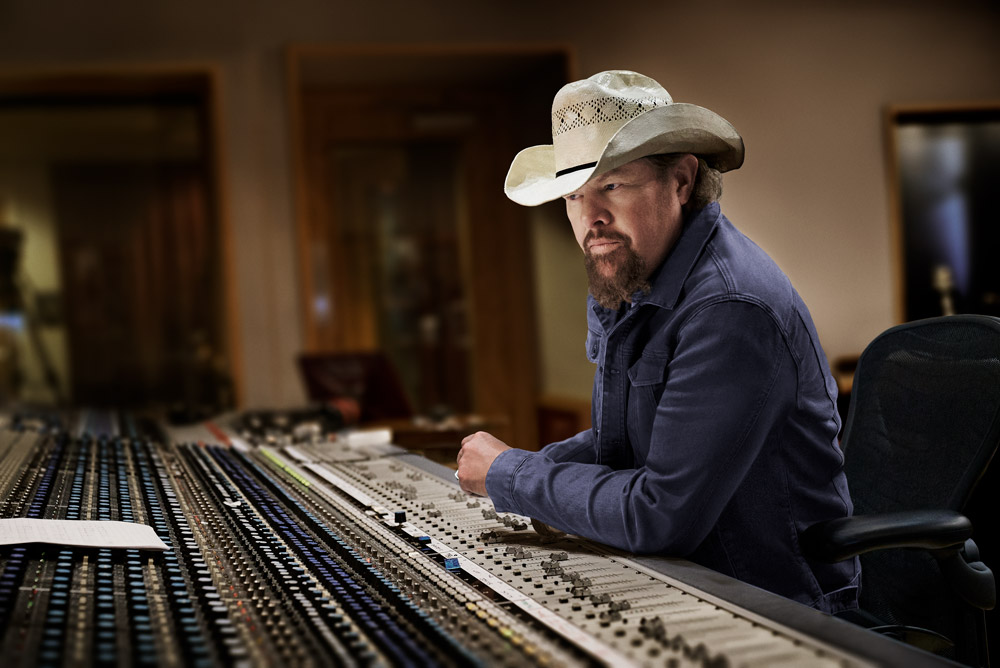 Nashville has been called a factory town, and for good reason. The star-making machinery runs steadily with songwriting appointments, expert studio craftsmen, clockwork production schedules and packaged tour hierarchies. While those conventions certainly have their place, Toby Keith hasn't had to avail himself of them for quite some time. That reality helps explain the more than five-year wait for Peso In My Pocket, but only in part. The impetus for the album is actually more complex, involving a worldwide pandemic, living in Mexico and the longest stretch off the road of his career. Not to be discounted, however, is the thought that as much as Toby Keith doesn't need the machine, maybe the machine needs him.

As evidence, consider the album's first single "Old School," which debuted at the highest radio entrance of his career on Billboard's airplay chart. This for an artist with 42 top 10 hits, 32 No. 1s, 40 million albums sold and more than 10 billion streams.

And it's not like Keith has been dormant since 2015's 35 MPH Town. Among his many endeavors was the Clint Eastwood-inspired "Don't Let The Old Man In" – already covered by artists as diverse as Engelbert Humperdinck and Willie Nelson, the song is arguably the greatest writing achievement of his career. That argument's a doozy, however, considering Keith was inducted into the Songwriters Hall of Fame three years before he wrote it.

Nevertheless, Peso In My Pocket is an unquestioned shift for one of the most consistent self-directed creators in any genre. "There was a time the music I was writing was automatic," he says. "When I got done with an album, I knew what the singles would be and they'd work. Every time. Toward the end of the last decade, I had stuff going out and it wasn't working. Part of that is, where I get my music isn't the new country stations, so I was out of the loop on how much it had changed. Then I went to an awards show in Nashville and realized I didn't know anybody. Up to then, it had been a slower change, but it was like someone flipped a switch and said, 'Everything before this point is over.'"

The continual renewing of the factory's product slate wasn't a surprise. "I get it," he says, "but then busting my ass every year to put an album out like I'd been doing for a couple decades didn't make as much sense. I've got enough hits to do four-hour concerts every night if I want to. So I decided to enjoy my time more and cut my shows back to June through Halloween."

Then COVID hit. "I stayed in Mexico for about four months, and it was like being on the moon. All my friends down there were afraid they wouldn't be let back in the country, so they all went home." Meanwhile, influential music and media executives were calling. "I had people coming to me from different parts of the business saying, 'We need an album from you.'"

Unfortunately, the process by which he'd amassed all those songs, stats and accolades – extending in 2021 to include induction into the Nashville Songwriters Hall of Fame, the Academy of Country Music's Merle Haggard Spirit Award and the National Medal of Arts – was unavailable. "I'd have Bobby Pinson, Scotty Emerick, Rivers Rutherford – even Eddy Raven – come out for a weekend of shows to write," he explains. "So it wasn't appointments like they do in Nashville. Over three or four days of that, you might end up with a couple of songs and, over the course of a year of touring, I knew I'd have 30 or 40 songs. The top 12 or 13 would be in my head to the point I already knew what they'd sound like recorded. That system worked much better than trying to write in a forced window when I was off the road. With COVID, I wasn't on the road and nobody could go anywhere, so I thought, 'You've written a long list of songs by yourself, dumbass. Get up and get busy!' I went through the ideas I keep on my phone and thought, 'Shit, I need to write these.'

Living in Mexico, isolated from collaborators, Keith honed another approach. "I run two or three days a week – writing songs in my head along the way. Then I'd do a guitar-vocal when I got back. Over that time, I'd pieced together several things I liked." And while you can take Toby Keith out of the country, his newly penned material is unmistakably him ... with, perhaps, a twist of lime. The title track offers trademark wordplay and his winking sense of humor. "She's Drinkin' Again" is a study in Keith's turn-on-a-dime musicality, as the traditional boozing song he intended was given an unexpected focus flip. "Thunderbird" arrives by way of Bakersfield, and "Happy Birthday America" is likely to confound those who still haven't grasped Keith's independent thinking on politics and patriotism. Even the lone co-write with Sammy Hagar is primarily a solo composition.

Also different on Peso is a deeper list of outside cuts. From lifting up a regional favorite ("Oklahoma Breakdown") and a journalist-inspired Keb Mo cover ("Old Me Better") to revisiting his "Red Solo Cup" collaborators ("Days I Shoulda Died") and paying tribute to the late John Prine ("Take A Look At My Heart"), the album ranges out.

"On those older albums I did with [producer] James Stroud, I never turned in demos," he says. "I'd tell him I had 15 songs, he'd ask to hear them and I just said, 'No, I'll just bring 'em to the studio.' He was like, 'You sure? We're spending big money on this recording session.' But I never let him down. Always had the goods. This time, there were a lot of people in my ear about what to cut and what could get played, which was never part of my process. I told everyone, 'Let's just go cut this stuff I've written and if it's not working, we'll skip the rest. If it is, we'll add a few things and have an album.'"

Keith co-produced with Kenny Greenberg for the first time, though their association goes back at least as far as the Incognito Banditos, a pop-up band they formed a decade ago for country classic-heavy bar shows. "Kenny is a real musician," Keith says. "He takes his work home and he's never happy until it's just right. He's the strictest producer I've ever worked with on vocals. He knows what he wants to hear, and he wants you to get there without having to tell you what that is. He just keeps going hoping you'll sing it that way one time. We took more runs at vocals on this one than I've ever done. We're talking about 10 or 11 songs I sang 30 times or more."

The exception was the aforementioned first single "Old School," which was written by Ryan Hurd, Maren Morris and Brett Tyler. "We're in Nashville, it's late in the day and I've sung 'Growing Up Is A Bitch' about 15 times," Keith explains. "We finished those vocals and Kenny said we didn't have anything else, but I wanted to get through it so I asked about 'Old School.' Kenny said, 'If you want to do it, let's do it.' We ran it through one time and I was ready for him to ask if I had another one in me, but he said, 'That's good enough for everyone to know what we've got.' And that was it. I went to the airport and went home."

Figuring his engineer Mills Logan would visit his Oklahoma studio for some more vocal passes, Keith was surprised to learn it was chosen as the first single. "They're already mastering it and I'm like, 'I scratched out a vocal when we cut it, but I only sang it through one time.' Mills had just stuck that on the master and everyone picked it as the single. Kenny goes, 'For the life of me, I can't remember getting this vocal, but it's freaking great.' So it's the only time in my career I've got a vocal on a record that is one take all the way through, but it's also the first and only take. And it was an accident."

Happy accident, to be sure. And in relation to a couple years of global turmoil, put Peso In My Pocket in the same category as many other pandemic positives. "My whole musical career, I haven't been off the road this long, so it's a reset button I never would have hit," Keith says. "I'd probably have kept going like that till I died. But you realize that trying to figure out what relevant means isn't important. That's not real."

Music for the right reasons, on the other hand, is as real as it gets. "I had fun writing it. I had fun singing it. And I had fun recording it. Now we're back on the road doing shows and having fun there, so it's exactly what we want and nothing we don't."