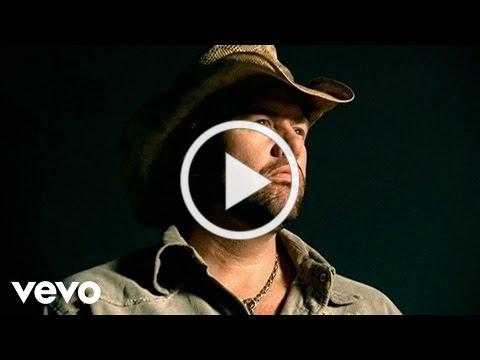 (NASHVILLE, Tenn.) A newly announced effort by YouTube and Universal Music Group pays off for Toby Keith fans this month in the form of remastered, high definition versions of seven iconic music videos. New versions debut on the platform July 3 - recognizing Independence Day - and July 8, the chart-topping singer, songwriter and entertainer's birthday. Meanwhile, the legendary Willie Nelson is releasing his version of Keith's revered "Don't Let The Old Man In" as a single from his new album First Rose Of Spring.

At the top of his list, Keith's iconic No. 1 smash "American Soldier" bows today with three other videos in newly remastered high definition video and audio. Gleaming like spit-shine on boots and crisp as dress blues, "American Soldier" leads the pack in perhaps Keith's greatest tribute to the fighting men and women of the U.S. armed forces. The timing is perfect, as America rolls into the July 4 weekend and the freshly polished videos confirm his support of the military, musings on American culture and fierce reaction to the terrorist attacks of September 11, 2001.

The next week, three upgraded videos show the breadth of his appeal, led by the self-deprecating humor and vivid imagery of "As Good As I Once Was." The recent partnership between YouTube and UMG is aimed at updating as many as 1,000 classic videos from the '80s, '90s and '00s. In addition to Keith, videos from Lady Gaga, Queen, Bob Marley, Nirvana, Beastie Boys, Black Eyed Peas, 50 Cent and more get an HD upgrade, improved sound and other enhancements.

The Universal/YouTube partnership extends to widespread social media support and playlisting, including the #Remastered campaign. Keith's videos will be highlighted within YouTube and across his social platforms on and around the July 3 and July 8 release dates. Both sets of videos bring renewed visual and audio clarity to YouTube viewers, and showcase Keith's immense range as a songwriter, singer and performer.

And it is Toby Keith, the songwriter, who is celebrating the July 3 release of Willie Nelson's First Rose Of Spring album bearing Nelson's new single "Don't Let The Old Man In." Written solely by Keith following a casual golf course chat with legendary actor/director Clint Eastwood, the song was almost immediately hailed as one of his finest. A remarkable feat for the 2015 Songwriters Hall of Fame inductee. The booklet for First Rose Of Spring tells the story, as written by Mikal Gilmore:

Keith was 58 when he wrote "Don't Let the Old Man In," for Clint Eastwood's 2018 film The Mule. Both the song and the film are about the same thing: an aged man who won't let his age impede him. When Toby premiered the song, he related the tale of playing at Eastwood's Carmel golf tournament in 2018 when he learned that the actor's 88th birthday was coming up in two days. Toby asked the actor how he planned to celebrate the occasion and Eastwood said: "Funny you should ask. I am leaving tomorrow to shoot a movie for three months called The Mule." Keith was surprised. At his age and stature, Eastwood could easily have retired. He didn't have to make or appear in films anymore. Toby wondered where that sort of energy comes from. Eastwood replied: "I just get up every morning and go out. And I don't let the old man in." Keith thought, "I'm writing that." What Toby came up with was a statement of understanding: He put himself in the shoes of somebody 30 years older than himself and envisioned the person's mettle: "I knew all of my life, that someday it would end/Get up and go outside, don't let the old man in." After Eastwood heard it, he featured the song over the film's closing scene. And when Buddy Cannon heard it, he wanted to bring Willie's voice to it. "I think it's the best song Toby Keith's ever written," says the producer. Though Keith wrote "Don't Let the Old Man In" for Eastwood, it could have been tailor-made for Nelson as his credo.

Willie and Toby discussed the song on SiriusXM's Town Hall, where Willie said, "there is a line in there, one of the best lines I've ever heard: many moons I have lived... but don't ask me how old I would be if I didn't know the day I was born. That's a heavy line, thank you for that Toby."

In addition to Nelson's version, Toby, artist and Principal of Show Dog Nashville, recently posted a powerful black-and-white video clip of his own intimate acoustic performance of the song as part of his pandemic shutdown Furniture Store Guitar Sessions. The social media series of song performances - performed with a guitar found in a Mexican furniture store - have displayed Keith's immense range with covers of country music staples, deep cuts and many of his own hits.

"American Soldier"
"Courtesy Of The Red, White, And Blue (The Angry American)"
"Made in America"
"American Ride"
"Country Comes To Town"