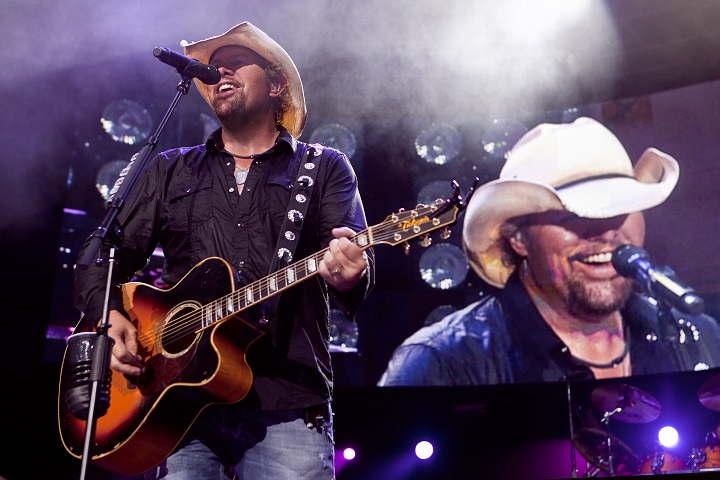 (NASHVILLE, Tenn.) Singer, songwriter, and entertainer Toby Keith played at last week's AT&T Pebble Beach Pro-Am golf tournament, where he was awarded Golf Digest's Arnie Award. The honor comes as he announces the initial slate for his 2020 tour, titled Country Comes To Town. And the iconic Willie Nelson has covered his solo-penned "Don't Let The Old Man In," considered by many to be the crowning songwriting achievement by the 2015 Songwriters Hall of Fame inductee.

Presented to "golfers who give back," the Arnie - named for the legendary Arnold Palmer - is bestowed this year on Keith, tour pro Jordan Spieth and NFL Hall of Famer Steve Young. Golf has been central to Keith's charity efforts, as his annual Toby Keith & Friends golf scramble and gala has raised $13.7 million dollars for his OK Kids Korral home-away-from-home for Oklahoma's sickest kids and their families. He discusses his love of golf and heart for giving in Golf Digest here.

While playing a round of golf with Clint Eastwood in 2018, Keith was inspired to write "Don't Let The Old Man In" after Eastwood uttered the title phrase in response to a question about his career longevity. The acclaimed actor and director liked the song so much, he incorporated it into his critically praised move The Mule

This year, Willie Nelson will include his performance of the song on his as yet unannounced album.

Celebrating his successes of this past decade, Nielsen (which fuels the Billboard charts) ranks Keith as No. 7 on their Top 10 Artists - Airplay Audience for the past 10 years. NPR notes, "Nielsen's report in particular sheds light on the artists who dominated the past decade. Drake, Eminem and Taylor Swift were the only three artists to rank in the top 10 for the most album sales and streams last decade - country stars [including] Toby Keith lead the radio airplay charts over the same time period."

After a historic 2019, Toby Keith is lining up for an even more impressive 2020, starting with the Country Comes To Town Tour running from May to September. Notable among the more than two dozen dates already set are the launch at Hertz Arena in Estero, Florida May 1; two Canada stops in late July; and a return to Sparks, Nevada July 11, where Keith set the Nugget Event Center attendance record last year.

The tour is named for his smash, "Country Comes to Town," and marks the 20th anniversary of its release as a single this March 22. Keith put it back in the set list during his 2019 That's Country Bro Tour! to an immediate crowd response. Over the course of the year, it occurred to him the song title was a logical tour name. Like so many of his hits, "Country Comes To Town" was written solely by Keith. And its lyrics hit at the party on tap for tour attendees: "You better be ready when the sun goes down, that's when country comes to town."

This year's trek includes an all new stage, set and video production. Select dates will offer access to the exclusive Diamond Bar area in the middle of a diamond-shaped stage thrust. Staffed by a bartender, VIP ticket holders will be in the middle of the action mere steps from the stage.

Last year, Keith commemorated the 2005 establishment of his own label and assumption of total creative control with the release of Toby Keith Greatest Hits; The Show Dog Years, which debuted "Don't Let The Old Man In" as well as his new song "That's Country Bro."